I got an early start from Fuente de Cantos. Probably 7:10 from the albergue. The way out of town is not marked well, I had to ask a couple of folks for help. They're always so kind. It was a dense fog I walked into.

Two other walkers told me the normal route was flooded, so I found an alternate that only added 2 km. They took the highway almost the whole way, but that wasn't necessary. I had nice country roads most of the way, passing two shepards, each with about 40 sheep. The crops varied from grain, to grapes, to olives, to soybean (I think, it was just germinating).

Got to Zafra just after 2pm.

As I was writing, Peter came up the stairs. Albert flew home this morning. He told me the water wasn't very deep.  With the forecast for sun the next 12 days, I think we won't have any more water problems for a while. I'm sure what the other guys had heard was a couple of days ago. These streams rise and fall quickly. Going to a late dinner with Peter, only because tomorrow is a relatively short day, and that I may not see him again. He is taking a day off to replace his backpack, which is 20 years old, heavy, and falling apart. (The cafe doesn't start serving until 8:30 or 9 pm, depending who you ask!

Meditation: Yahweh
Distance: My guide says 25.2, but I'll call it 27 km due to the detour.
Weather: Low 44 High 65 Foggy, then sunny
Route tips: I walked the normal Camino for 2 hours, then took the N630 for one hour. Then I took an unnamed road northwest, turning west into Puebla de Sancho Perez, and caught the Camino into Zafra. This route worked well for me, but during dry periods the normal Camino would be best the whole stage.
Albergue: The Vincent Van Gogh albergue is great. Zafra is a really pretty town. Bigger than the last few. 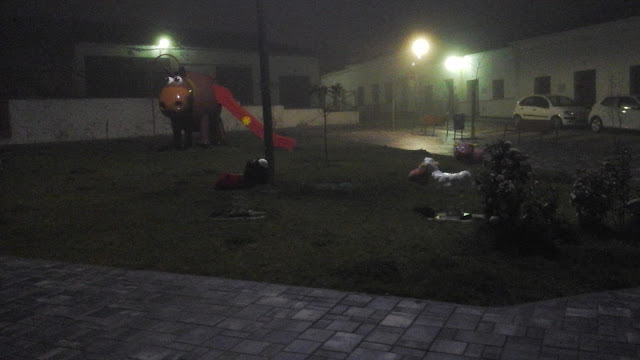 "City playground" in Fuente de Cantos at 7:15 am 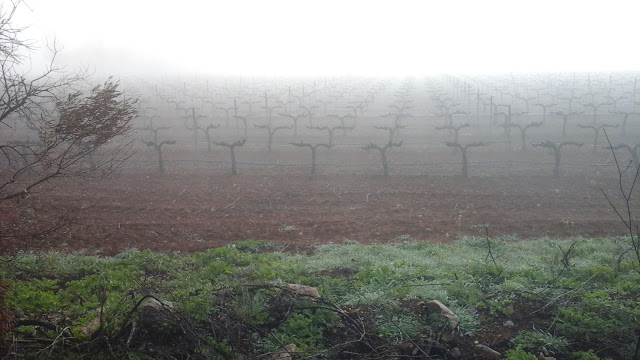 Vineyard just before the sun burned off the fog 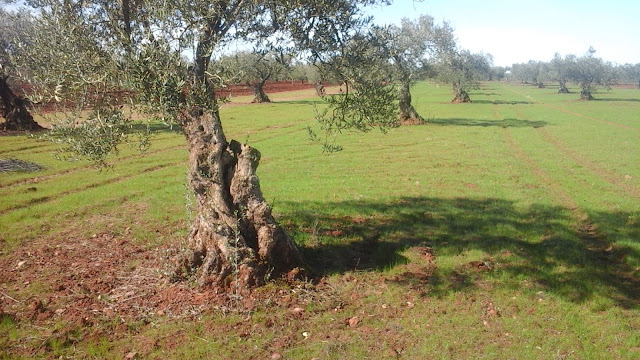 My second break today was next to these old olive trees 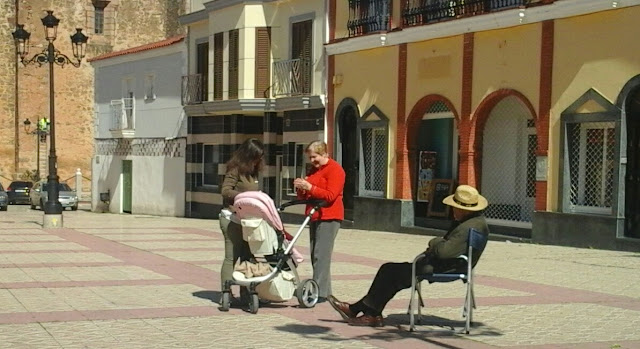 Three or four generations?
Posted by MikeAndRuth at 10:30 AM