I'll try to catch you all up on a few details, might need to add pictures later. Wifi very slow here.
Yesterday's walk was "only" 19 km, and today's was 26. Tomorrow is another moderate distance, then a series of longer days await. The weather has cooled a bit, with a high about 72F today, but a very strong head wind. The forecast is for a bit of rain scattered over the next few days, hopefully not too much.
My one blister now has a partner, but the older one is pretty much healed, and the new one seems minor.
I'm with a delightful group of folks right now. All really helpful and supportive of each other. There are 2 Germans, 3 Spaniards, one Frenchman, and a couple from Scotland. And me.
I'm doing my best to NOT be the rude American. I've met a couple of those already. It's really so nice to see folks from different cultures, and speaking different languages, all getting along so well.
I talked about sounds in yesterday's post, then I heard my first Cuckoo bird this morning. We heard them every morning last spring. I've been too far south or too early in the spring, I'm not sure which. Amazingly?, they sound just like my Nanny's Cuckoo clock. This afternoon all I could hear was the 30 mph wind whistling in my ears. But it was a nice path. I went by a ewe and it's very newly born lamb. It was acting quite protective.
This town is odd for a Camino town. It was built mostly in the 1960s as a annex of Caceres, the capital of the province.  We all carried extra groceries today, which we purchased yesterday, the grocery stores are closed on Sundays.
I greeted Cleophus last night at the monestary. He was our guide for the tour of the building last year. He didn't remember me, but he seemed thrilled that I remembered him from our previous stop. I also wanted to comment on the picture of the birthday party from yesterday. We just happened in on the party in the local 'bar'. The kids were really excited to talk to me, they all speak just enough english to have fun with it. They ask me about my favorite "football" team, to which the Denver Broncos was not an acceptable answer. They were looking something more like Real Madrid (soccer).
Yes, I'll need to post pictures later, the wifi is too slow, it 'times-out' with pictures. I appreciate all the comments on the blog. 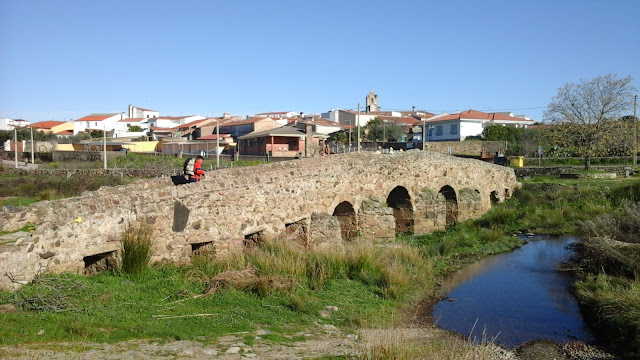 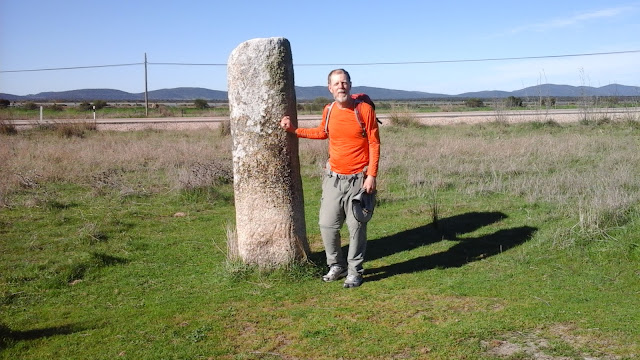 I think this is similar to a picture I posted last year, but these stones are just too amazing. They've been standing along this road for nearly 2000 years, I mean not ever needing replacements! 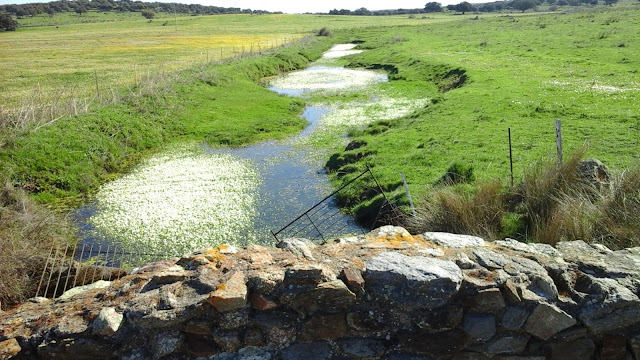 The frogs were going crazy with croaking in several of these beautiful swampy areas, all covered with tiny white flowers 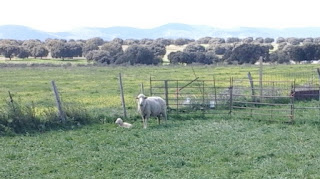 Well that didn't work. This was the ewe standing over her lamb. 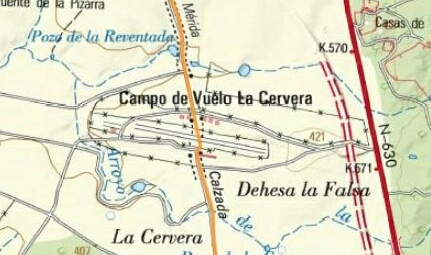 We passed one of the most odd crossings on any Camino, right across an active runway. In fact a small plane took as I was taking a break there. It flew right over a large herd of sheep grazing at the end of the runway. This is the map, the Camino is the yellow path.
Posted by MikeAndRuth at 6:49 AM