Three Caminos in One

"Success is peace of mind, which is a direct result of self-satisfaction in knowing you made the effort to do your best to become the best you are capable of becoming." John Wooden.

I leave tomorrow for another walk-about. This pilgrimage will encompass three separate destinations.

The first section will be the Camino Salvador, from Leon to Oviedo, in northwest Spain. Historically, a small percentage of pilgrims on the main Camino (Camino Frances) would divert at Leon to visit the cathedral in Oviedo. This is about 120 km (75 miles) through mostly mountainous terrain. It has recently been revived with refuges and trail markings.

After visiting Oviedo, most pilgrims turn west and continue to Santiago de Compostela. This route is called the Camino Primitivo. In this context the term "primitivo" does not mean primitive. It refers to "original" or "oldest". History indicates that this is possibly one of the oldest routes to Santiago, thus it has been given this name. It is also used by some of the folks who walk the Camino Norte, along the coast, if they want to go overland beginning at Oviedo. This 320 km (200 miles) is also through a largely mountainous region.

The third and last section is from Santiago to the coast. Ruth and I walked to Finisterre in 2014. I hope to take the fork to Muxia this year. There is some evidence that, even before the Christian pilgrimage tradition began, folks would walk to this part of Spain. Being one of the farthest west points of land in Europe, it is understandable that it might have held some mystical importance. This last section is about 90 km (55 miles) or 4 days of walking.

As always I leave with high hopes and low expectations. Pilgrimage in Spain is not a particularly dangerous endeavor, but even a simple stumble can end ones ability to continue. I am confident of my success using John Wooden's definition at the beginning of this post.

Here is a map of the three sections, end to end, going from Leon to Oviedo, to Santiago, and on to the coast, all in northwest Spain. 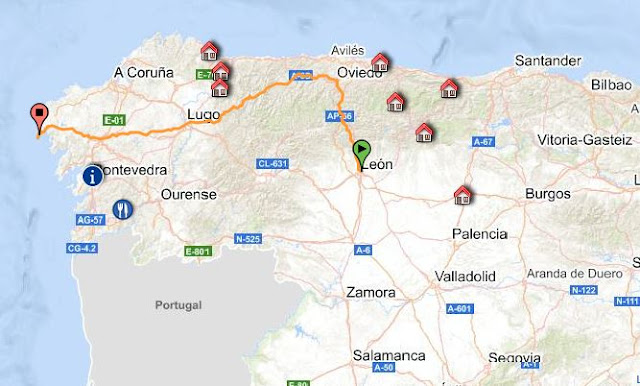