Eighteen months ago I wrote about a chat Ruth had with an elderly Spanish gentleman named Dunicio (see November 1, 2014 post). It was about 2 hours out of Sarria where we had met him, and he had asked Ruth to pray for him and his wife Castora. Ruth had done just that when she reached Santiago, and many times since. So today we watched for him as we walked this segment. For a good while we felt that we must have passed his home, and it seemed so unlikely that he would be out at just the moment we were there.

Then, on the road ahead, was an old man walking toward us. No cows or dog with him this time. He didn't look quite the same, but we stopped him and ask his name, and as he spoke we realized it was him. I showed him the short video I had taken of him in 2014. Ruth asked about Castora. "Si, si, Castora bien.". We shared a few laughs despite the language barrier and his hearing loss.

He gave us two more walnuts.

We will continue to pray for them.

Here is the picture I took in 2014, in the excitement today we did not get the camera out this time. 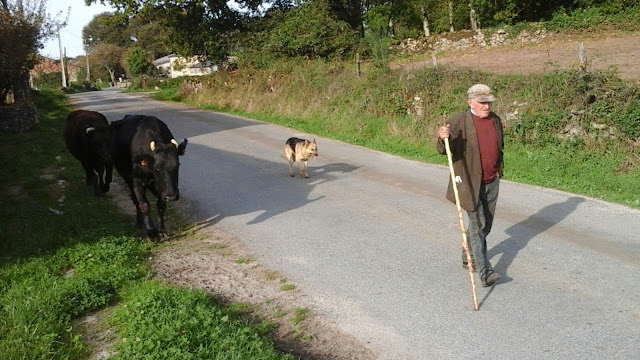