Two tales to tell. First the pleasant one. Last evening was charming. Bridgett came in late after walking 30+ km from El Cubo. Dinner was nearly ready in the kitchen, so we invited her to join James and us for pasta. She insisted on going to get some champaign, so off she went (it is her last day on Camino). She returned with the bottle and numerous dessert choices, and we all ate as much as we could, including three desserts each! After dinner, other folks joined us and we sang folk songs of several countries. The ones I remember were American, German, Spanish, French, and Austrian. I believe my favorite was Aidlewies.

The second tale is of today's trek. One simple mistake and we ended up walking for an extra hour.  Everything seemed perfectly normal. We had yellow arrows, we were going generally north, we saw James' footprints in the mud, and it was raining. Hard. In fact, if I could have looked at the GPS track on the tablet I would have realized we were going a bit too much west, but the hard rain made it impossible to get the electronic device out with no shelter to be found. And it all felt right anyway, so there was little be concerned about.

Then the Camino Portugese sign showed up next to the trail. This was not right. A branch of the Via de la Plata leaves Zamora going mostly west, and joins the Camino Portugese, and that was where we were. There was a town a few hundred yards ahead, so we walked to it to try to get out of the rain and figure out a plan. After getting a GPS lock while in a little shop, we realized that we were north of Zamora, but about 4 km west of where we should be. The map showed a couple of roads heading north and east, so we took the most direct option to get us back on the VdlP, and 3 hours later we were in nice warm shelter.  Three hours after that, Ruth has a big pot of soup on the stove, it should be a fine evening.

Weather: No idea of temperatures, probably in the 50s, but hard rain all morning, seemingly getting colder each hour. A little sunshine and a little hail in the afternoon.
Quote from RA's journal: "Camino blessings happen in the most unexpected ways."
Tips for pilgrims: Don't believe any guidebook that say's the way out of Zamora is simple. James walked out ahead of us on the wrong route, and we did the same. Three other men, each independantly, were just a few minutes behind us, all of them on the wrong path! (One German, one Frenchman, and man from Holland, so not all following the same guidebook). They needed our assistance to get pointed back the right direction. Since we do not know where we made our mistake, my only advice is to be sure you stay close to the N-630 highway and if you find youself going west for more than 5 minutes you are probably on the Portugese fork.

P. S. We really appreciate the comments on the blog and will try to respond to them soon. Internet access is not always easy to find. Ruth is sad to miss a good spring snowstorm in Denver! 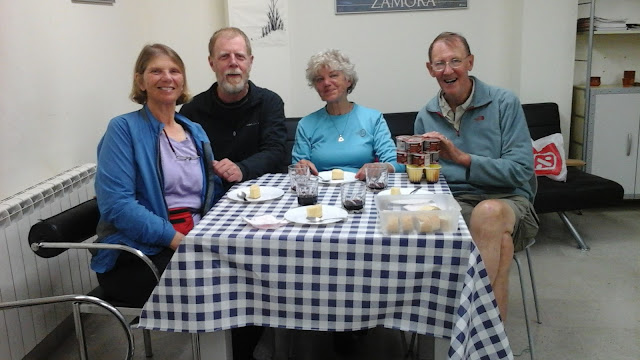 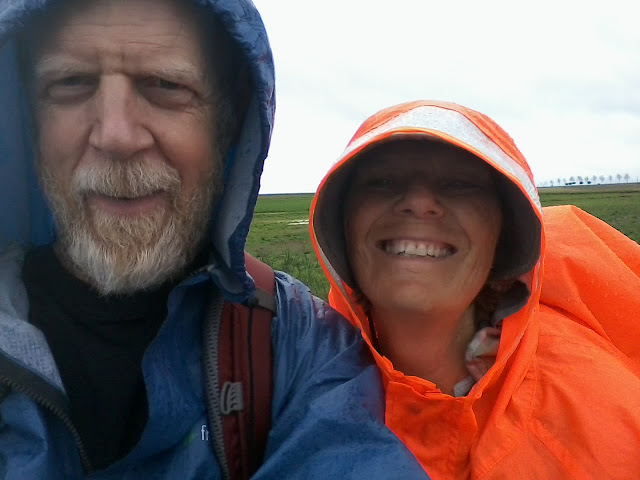 Only one picture from today!
Posted by MikeAndRuth at 8:49 AM