Well, not exactly walking backwards. Starting today, I'm walking east along a portion of the Camino Sanabres. Most pilgrims these days walk toward Santiago, I am walking away from there, toward Zamora. (In previous centuries pilgrims HAD to walk both ways, there were no planes, trains, or automobiles for the trip home.)

Yesterday was a travel day for me, which turned out to be more complicated than I had hoped. The bus from Muxia to Santiago was simple enough, although it was delayed 40 minutes because there were more passengers than seats. (I never figured out why the delay helped the situation!). Once in Santiago, I found out the train I had planned on taking had no seats available. So I walked to the bus station and took a bus. It was an express bus, but it took a long detour, through Vigo. So it didn't arrive in Puebla de Sanabria until after 9 pm. A small hotel room near the bus stop was my home for the night, thanks to Booking.com.

I've met folks who follow the Caminos "backwards", but I have no idea how they do it without a GPS. The required markings are placed only when needed for folks walking the correct direction. Even with the GPS I missed a couple corners today.

The albergue in Asturianos is very basic. Three bunks, two toilets, and one shower. That's it. There is a small store in town and a restaurant on the highway nearby.

Fall is in the air. Today was by far the coldest day so far. Heavy frost on the grass and oak leaves indicated a low that was well below freezing. Even the afternoon breezes were chilly. The sun provided energy for drying the laundry.
I wonder how the Broncos are doing, but don't really want to know. 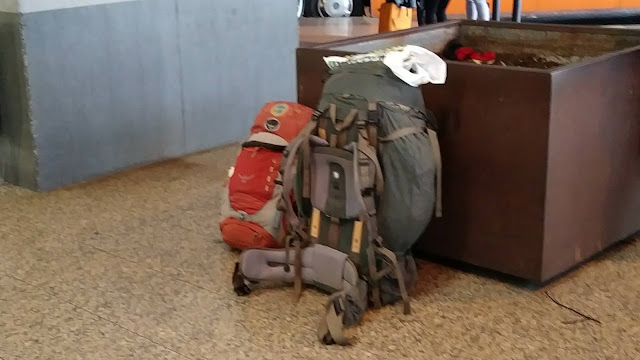 Another pilgrim had a backpack a bit bigger than mine (his on the right). 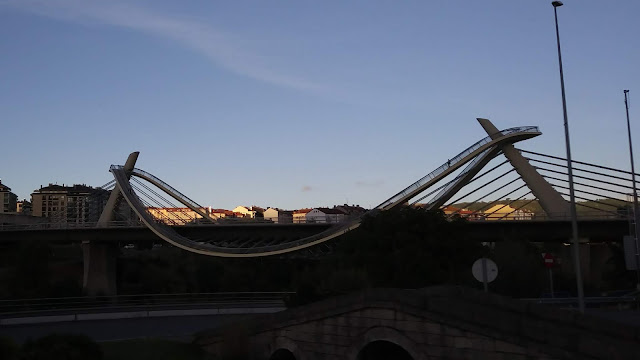 The bus drove by the fancy bridge in Ourense. 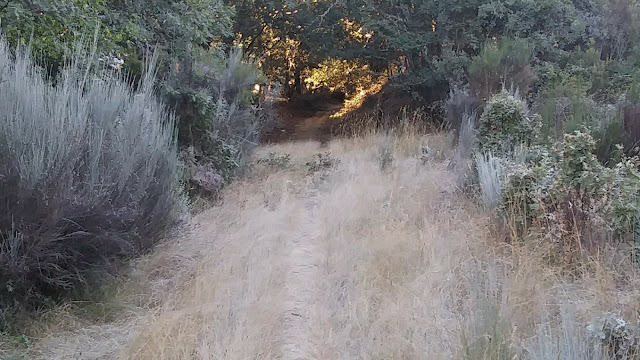 No "fake dirt" on the Sanabres Camino. 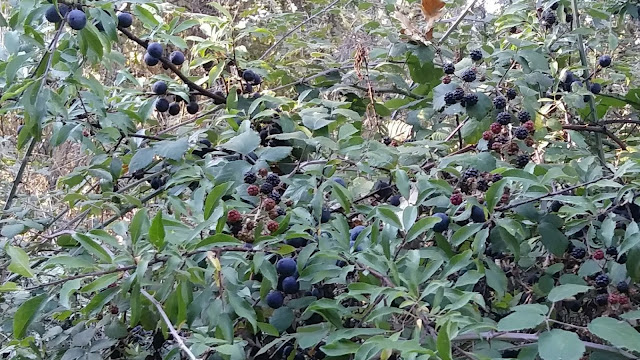 Blackberries and plums intertwined along the trail. The fall harvest is one reason I love this season for Camino.

Posted by MikeAndRuth at 7:50 AM