At the breakfast table this morning I shared, with Roseanne and another pilgrim, a story from the very first day of the very first Camino on which Ruth and I walked:

Just a few kilometers west of the city of Astorga, Spain is the lovely village of Santa Catalina. Arriving there about 2 hours into the morning, it was time for a bathroom break, so we bought "dos cáfes con leche" and I found a table in the shade. Ruth introduced herself to another pilgrim, and I happened to snap a photo of the street scene, including them, just as they shook hands. Andreas would cross our path 3 or 4 more times in the next week or so.

One day we were walking with him as we passed hundreds of acres of pine trees planted in rows. This was such a strange sight for a kid who grew up in the wild woods of western Montana, and I must have commented so. Our new friend told us that this practice had recently ended in his home country of Germany. After centuries of using this efficient way to commoditize the forest, it had been found to be so harmful, it was banned. An ecosystem needs diversity of life forms to be healthy. The pruned branches drown out almost all other plants. The normal fauna has nothing to eat, and no place to hide. A large amount of lumber can be generated, but the result is a sterile, mostly lifeless environment.

A few days later, late in the evening, the three of us shared a large bowl of Caldo Gallego, the traditional peasant soup of rural Spain. We told him a bit about ourselves and our family. He opened his life to us in an amazing way. I'm nearly certain he spoke words he had never spoken before. I cannot tell his story in detail, it is too personal. I'll just say that he shattered many of my previously held views of Christianity, morality, and right/wrong.

I don't mean that my beliefs were transformed that evening. In fact, it was a few weeks later, after we returned to Denver, when the significance of meeting Andreas hit me. It was the closest thing to a "revelation" that I have ever experienced. The vision I saw was of a life lived like "trees planted in rows", my life up to that moment. There was no nourishment for ideas that were outside of the carefully cultivated religion of my youth. I now believe this is why, at that point in my life, I had lost my faith. You see, I had experienced the wrecks that the world can create (or that I brought on myself), where simple answers wilt under the pain of loss. I had also seen that joys can be found in a full spectrum of paths, not just the squeaky clean image presented on KLUV radio. My reality and my religion were in conflict.

Andreas's words sank into my soul. They changed my future.

I'm not claiming that the Camino has given me all the answers to the great questions of life. I'm still human. I still have a high propensity to screw things up. All I'm saying is, every morning on Camino I look forward to the next Andreas, and the next conversation over a bowl of Caldo Gallego. And they happen all the time.

From this journey, I will forever treasure Ramiro, Esther,  Kevin, The Two Barbaras, Darrick, Marco, Julie, Achille, Franz, Peter, Christoph, Ushka, Magdalena, another Andreas and his wife Francesca, Matt the ultra-marathoner, Jose Louis from Cordoba, Boaz the lawyer from Isreal, the 9 ladies walking together who somehow all knew my name (two of whom had been sprayed with liquid manure), Corneleo (who's name I learned on the last day I saw him), Ken, Pat, Mary, and Becky (the only 4 folks I recognized in the Cathedral square the morning I got to Santiago), Tony (who stood next to his wife Lucy's bed one evening for 20 minutes giving her a foot rub), Muoro from Italy (who told me the family name Piselli is very rare in Italy), Fatima from Brazil who hoped to walk to Fatima, Portugal, and Jose from Mexico who might have been the only person I walked with for an entire day.
I said a prayer for all of them in the little chapel above the sea in Muxia.
Today, for right now, that is what the Camino means to me.

A special thanks to all the hosts who cleaned up after me, the cooks who helped feed me, and my fellow pilgrims for once again changing me - in ways yet to be seen. 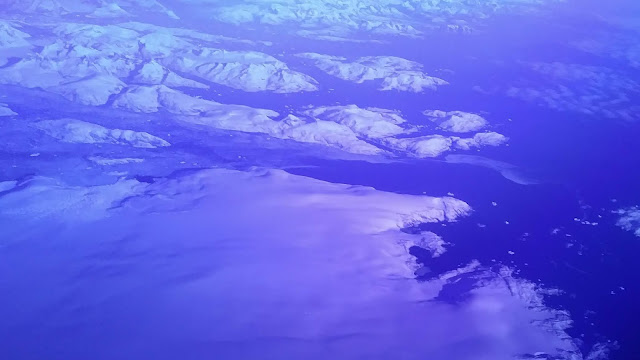 On the return trip the plane flew over the southern tip of Greenland. You can see icebergs in the deep blue water.
Posted by MikeAndRuth at 6:35 AM