To Santiago do Compostela

Walking into Santiago this time was different. As Holy Week approaches the crowd was unreal. Noise, cameras, tourists, youth groups, tour guides with speakers, street performers, trolley trains, peddlars, bagpipes, and more pilgrims than I've seen in 39 days all put together! (the large numbers of pilgrims are mostly from the Camino Frances).

I just tuned them all out and walked across the Cathedral Plaza in tears.

I could concentrate on the pure joy of finishing, the sadness of it being over, the satisfaction of completing a 1000 kilometer trek with just my legs, and the thankfulness I have for so much more than I deserve.

I'm so thankful for:

Ruth Ann - Thank you so much for supporting this trip in so many ways. The Skype talks. The prayers. The permission to risk so much. Tuesday, Baby, Tuesday!
Health - Not a single illness or serious injury, and just having the ability to attempt such a walk.
Pilgrim friends - I'll just say that without Alan, Anne, Nina, and Ralf, this Camino would have been disappointing. With them, it will be remembered as one of my life's favorite times. That's how important good friends are! There were many other folks with whom I had shorter visits. I enjoyed them all, but a special shout-out goes to Doretta a German lady with a dog named "Hoffmann", and the two men from Holland with whom I walked some in the first week, Peter and Albert.
Weather - Only about 10 or 12 hours of rain while walking for 39 days (several other hard rains in the evening or at night). Temperatures from 26F to 85F, but mostly in the 40 to 70 range, just perfect for walking. Unbelievable.
Hospitaleros - These folks help pilgrims every afternoon and evening, and cleanup after them every morning. What an amazing gift.
Food - I'm especially thankful for the good food on this trip, whether the other pilgrims and/or I cooked it, or it was prepared in a cafe or behind the counter in a shop, or just bought in the store.  Food becomes such a passion because a pilgrim must carry the eats for the day, be prepared for tomorrow each afternoon, and find a hearty dinner at the end of each stage.
The Spanish People - So many times on a hot afternoon, I heard a horn honk and saw the driver give a thumbs up. Or I walked by an old woman sweeping her driveway and she says "Buen Camino". These people understand the Camino and the pilgrim experience.
Scenery - The Via de la Plata, and especially the last 300 km (called the Camino Sanabres) is really beautiful country. So much of the time is totally "in the middle of nowhere" with great landscapes: flowers, forests, wildlife, ranchland and farmland.
Peace - I wrote about this a couple days ago. I'll just add a quote: "The Camino is God's dream for how people should be when they are with each other." Hank Leukart quoting a Santiago nun in his film "A Camino de Santiago Story: To the end of the World" - my absolutely favorite Camino film which can be found on youtube now. 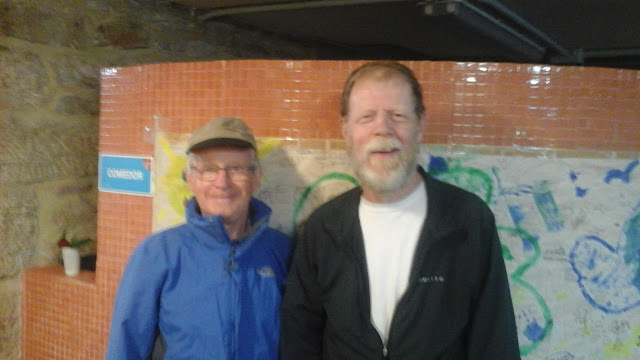 Ran into Thaddeus one more time. He was humming or whistling "Amazing Grace" almost every waking moment of his Camino. He's done many Caminos, this is his first since his wife passed away recently. 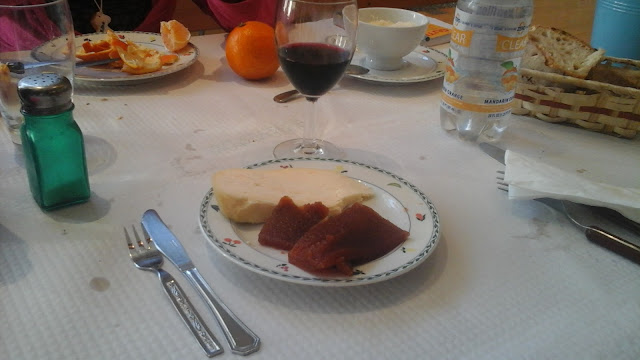 The best postre (dessert) of the year, at the small cafe Sol y Luna in Cea. This is quince jelly served with a soft Galician cheese. It's more typically an appetizer, but it was a fantastic dessert. Quince is a pear like fruit, not good off the tree, but the jelly! 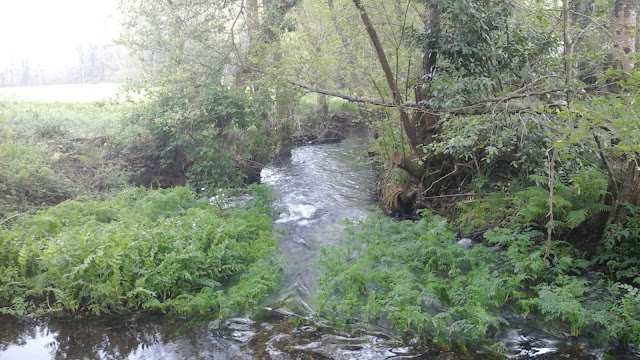 I've noticed a Brook Trout sized fish in many of these streams along the way. 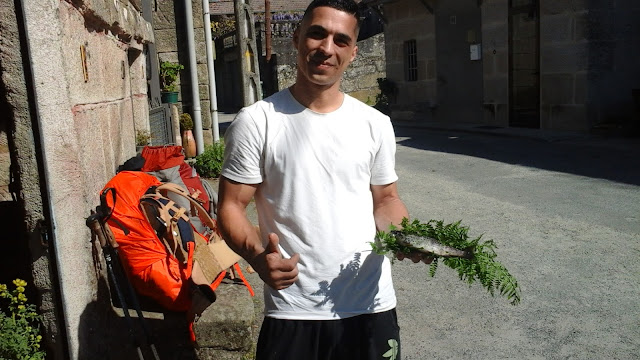 And I ran into a local that had just caught one. I liked the presentation, held in a fern. 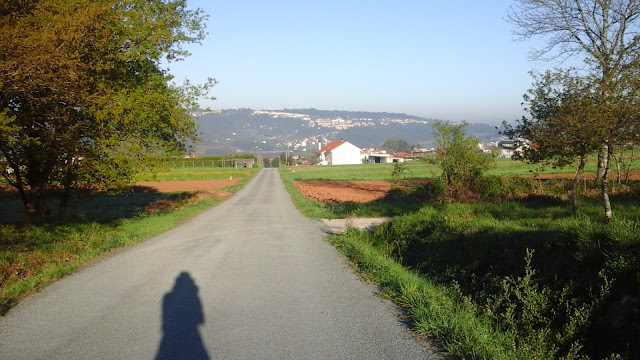 One more hill. Santiago is over the far ridge. 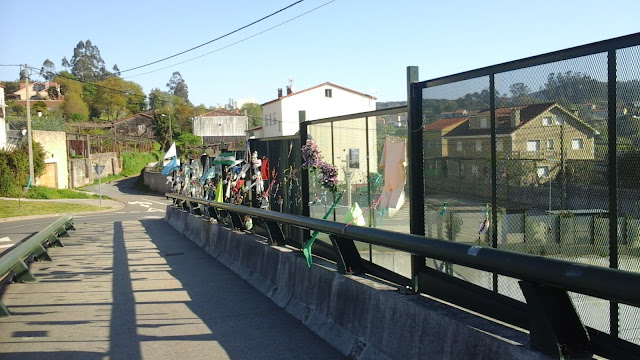 On this entrance to the city, pilgrims cross a pedestrian bridge at the site of the tragic train wreck of 2013. Eighty people died as the train derailed entering Santiago. Some folks leave items on the fence as a memorial. 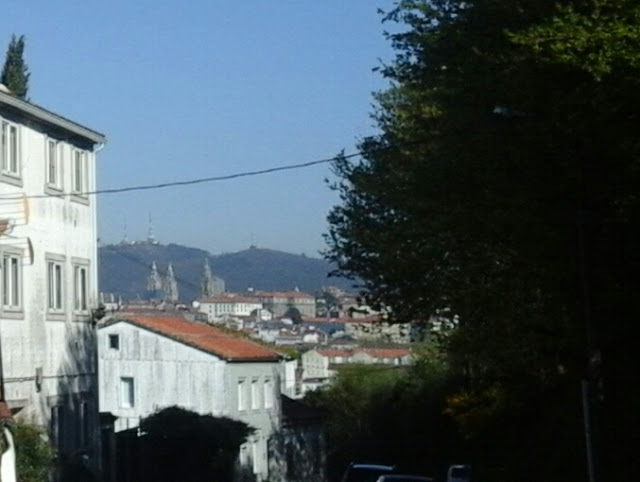 Shortly after the previous pedestrian bridge, the distant cathedral can be seen. It felt more dramatic than the picture seems to communicate. 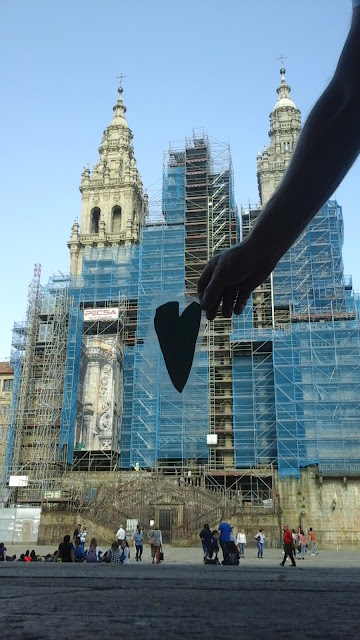 I carried the "heart", that our granddaughter Lillian made for Gramzi, for all 1007 km. It was one more small motivation to continue through some of the difficulties. 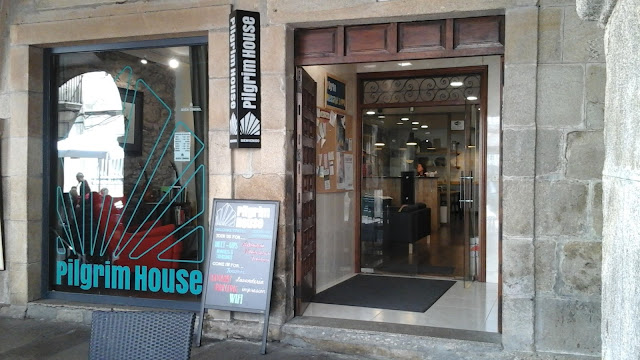 Lastly, a "shout-out" to the Pilgrim House. A place where you can print boarding passes, leave your backpack for the afternoon, maybe meet other pilgrims, and find a welcome at the end of your Camino. At 19 Rua Nova, from in front of the Cathedral it's around to the right and behind.
Posted by MikeAndRuth at 8:05 AM