What is the "Via de la Plata"?

When folks refer to 'The Camino' , they are usually talking about the Camino Frances. It goes almost directly east to west across northern Spain, ending in the city of Santiago de Compostela.

It is only one of the many pilgrimage routes that come into this city. There is also a route from Portugal, one along the coast, one from Madrid, and several others. On our previous walks we met two young women who had walked all the way from Geneva, Switzerland. We also met a woman walking back to her home in Slovenia, after spending 5 months to get to Santiago!  So you see there is quite a variety of choices.

The Via de la Plata begins in Seville, the largest city in southwest Spain. It travels directly north for about 400 miles, then turns west for about 200 miles.  This path generally follows an ancient Roman road, as the Iberian peninsula was an important part of Empire at about the time of Christ. Several of the landmarks along the way are still standing from that time.

Seville is at an elevation of only 23 feet, and has a warm dry climate. The trail reaches about 4500 feet as it enters the extremely wet province of Galicia in northwest Spain.  Several days will be along straight, flat, farm roads across the wheat fields of the Meseta (plains). The last couple weeks will almost surely involve wet trails surrounded by moss on the ground and fog in the air.

The trail skirts the Spain-Portugal border as indicated by the yellow GPS track on the map: 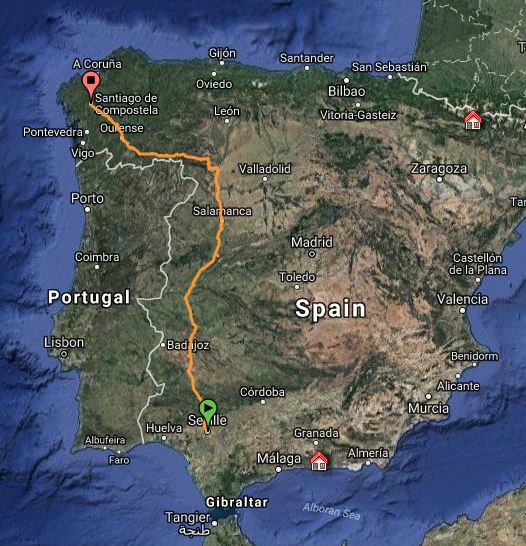 As a frame of reference, this path is similar in distance and latitude to a trip from Raton New Mexico to Buffalo Wyoming or from Norfolk Virginia to Niagara Falls.
Posted by MikeAndRuth at 10:03 AM