There's quite a lot of talk about the Camino becoming crowded, and the numbers have increased significantly over the last few years.  In 2006 almost exactly 100,000 people recieved compostelas.  That number had doubled by 2013, and it looks like more than 300,000 pilgrims will enter Santiago this year.
The easiest way to avoid the crowds is to walk a less travelled route to Santiago. If you've been following us, you know that we started this year's walk on the Via de la Plata, a Camino with only 3% of the total pilgrims each year. The pilgrim numbers are less on these types of routes, but so are the number of beds in the refuges. Even though we saw few folks during the walk each day in early April, there were still times when all beds were taken at the end of the day.
After nearly 100 days of walking in Spain, we've found a few things that minimize the 'crowded' feeling, even on the Camino Frances.  First is going in the spring or fall of the year. Many Europeans vacation in July and August, so an October or April walk avoids this surge.  Starting even earlier or later is possible, but you would need to be prepared for cooler weather. Also, some of the refuges don't open until late spring, and close for the season at the end of October.  In 2014 and 2015 the number of pilgrims in September increased dramatically, and this year we've already heard that the huge albergue in Roncesvalles was full on a nightly basis before May 1st.  We would not recommend starting in St. Jean Pied de Port after April 10th in the spring, or before October 1st in the fall (if you want to avoid the crowds).
Secondly, we try to stay in smaller towns which are NOT recommended by the guide books as typical stops. Last night we stayed at Albergue Camimo das Ocas, about 5 km after the major town of Arzua. The result of this was that, in the morning, just as the big crowds were leaving Arzua, we were about an hour ahead of them. We did not see another pilgrim until we took a break, about 2 hours into our walk.
And lastly, we take alternate routes when possible. Along many stages there are two or three optional routes. The best example of this was the start of the trip in 2014.  We took two days to walk to Roncesvalles, stopping in Valcarlos on the night between.  Valcarlos is in the valley, just to the north of the more popular mountain route.  We did not see another pilgrim for nearly two days, even though about 180 folks were in Roncesvalles the night we got there.
Of course, sharing the experience is one of the joys of the Camino, so our goal is never to avoid everyone.  When we want to do that, the Colorado wilderness has some trails where few humans ever pass.
Here are a few pictures from the last couples of days (Days 34 and 35, we hope to make Santiago on Thursday afternoon) 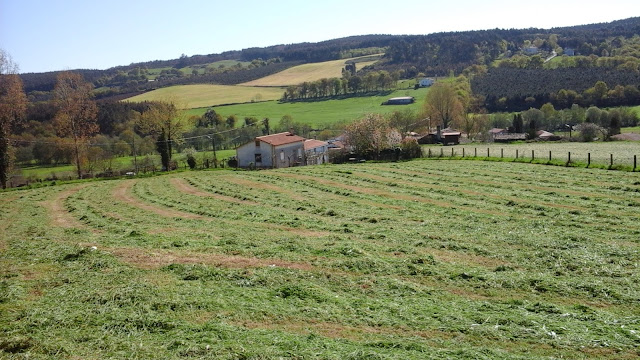 The smell of freshly cut grass was nice.
We've passed many other 'not-so-nice' agricultural odors along the way. 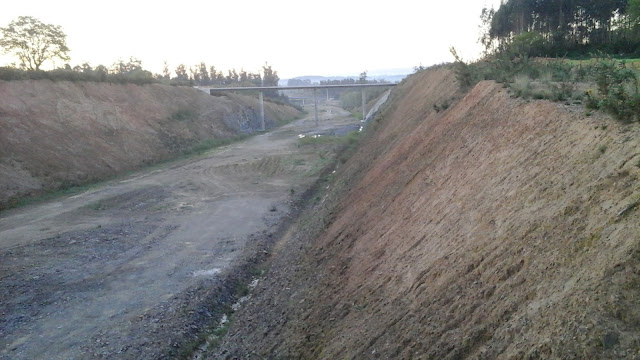 This highway excavation was here in 2012, it still looks like it did then! 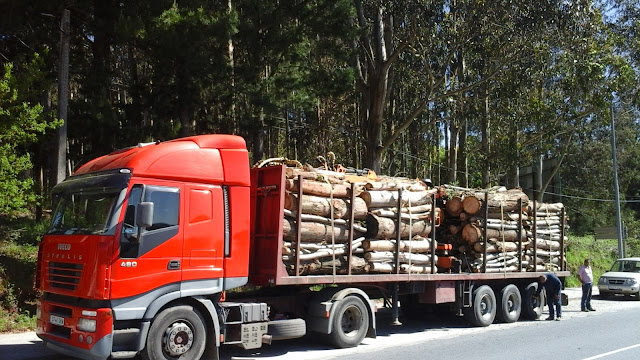 Lumber is an active industry here, mostly from planted forests.
These are eucalyptus logs, a tree that was brought to Spain in the early 1900s. 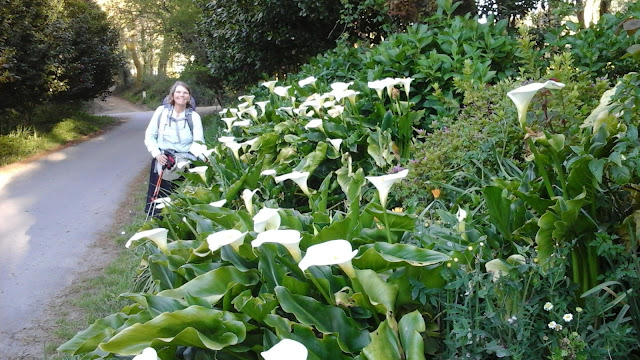 We don't see as many wildflowers in this part of Spain, but the cllimate is perfect for many cultivated varieties, Ruth loves the
Calla Lilies.
Posted by MikeAndRuth at 4:40 PM