The Via De La Plata

Someone has said "You walk the Camino Frances to meet others, you walk the Via de la Plata to meet yourself."

We've been to Spain twice in the fall, and we look forward experiencing it in the spring.  We are eager to see the young lambs and calves, the storks nesting on the church towers, the wildflowers in bloom, the green fields of grain, and so much more.

The most common name of the path we are walking this year is the Via de la Plata.

There are several walking paths that lead to the town of Santiago de Compostela.  Our previous walks in Spain were from east to west, along the Camino Frances. This walk with be from south to north.  The Via de la Plata is a path that dates back to at least Roman times.  A western fork now leads to Santiago.  Several sections of our walk will be on stone roads built by the Romans.  These paths have seen the fall of that empire, followed by several centuries of Muslim society, and then the gradual transition to a Christian culture.  We plan to start in Merida, which dates to Roman times, pass through several towns with names that originated within the Islamic tradition, and visit some of the most spectacular Christian cathedrals in Europe.  This unique blend of history is sure to be fascinating.

The Via de la Plata is one of the lesser traveled paths in Spain. It is likely to seem lonely at times, with longer distances between towns.

We look forward to whatever the road has in store for us, and would love to have you follow along.  You are welcome to post comments, we really enjoyed hearing from family and friends on our preious walk. 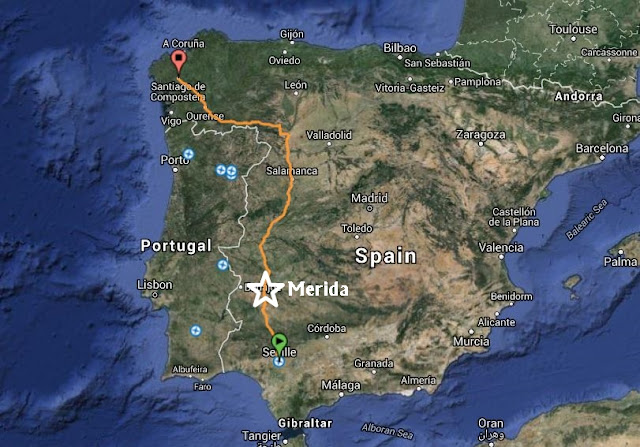 A map of the Via de la Plata, with our starting point, Merida, highlighted.
Posted by MikeAndRuth at 2:59 PM

Email ThisBlogThis!Share to TwitterShare to FacebookShare to Pinterest
Labels: Vdlp